Many of you won’t know what it’s like, but there are many of you out there who understand what it entails to raise a child with autism or any sort of special need.  For me, it’s the most challenging part of my life that I face every day.  My oldest son just turned seven years old, and he was diagnosed with moderate-severe autism just before the age of three.

The first thing we noticed was a speech delay.  By age two, he was hardly speaking, but he was a happy kid.  We started speech therapy and got him in Help Me Grow.  From there, he began preschool in the public school system in a 50:50 peer model:special needs program.  He was on an IEP and was receiving services at school: speech, occupational, and physical therapy.  We were also taking him to private therapies.

We tried one year of preschool at an ABA-based (applied behavioral analysis) school, but it wasn’t the right fit for him.  Unfortunately, that was when we started seeing a big decline in his learning.  He was actually regressing.  Things he’d known for the last couple of years, like his ABCs and numbers, were no longer of interest to him, or he simply lost the ability to recognize them.

We returned to the public school system for kindergarten and had a much better experience.  He’s in the intensive needs classroom with just a few other boys, a teacher, and two aides.  In first grade, he continues to be in the same setting, luckily with the same teacher and aides.

But these are all facts.  Facts are easy to share.  What’s hard is the emotional journey that we travel as a family every day, knowing that this is lifelong.  This isn’t something that will just go away like a cold or the flu. 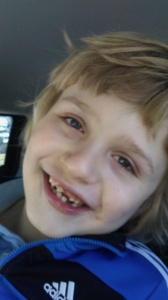 There are a few well-meaning people who tell me, “You never know, he might grow out of it.”  While this may be possible, as there are cases where autistic children suddenly make huge progress at later ages, the hard truth is that most don’t.  I’m not being a pessimist here, but rather a realist.

If I’m being frank, progress hasn’t been what I had hoped for when we first began this journey, but I’ve learned to celebrate every tiny victory.  My son loves swimming, for example, and he has shown remarkable improvement in lessons lately.  He has begun to swim on his own, which is huge.

But there is the admission that every parent is afraid to make to themselves: their child isn’t progressing like their peers.  It’s hard, really hard, to see your child struggling where other children seem to have it so easy.  When the child’s younger siblings bypass them in speaking, writing, drawing, reading, and so on, the gap continues to widen as time passes.

There are days when we barely seem to be keeping our heads above the water.  Usually autistic children have other diagnoses, and such is the case for my son.  Earlier this year, it was confirmed that he also has ADHD.  So, he has sensory meltdowns caused by autism and hyperactivity as well.  Trying to find a medication to help with the ADHD hasn’t been easy, for the side effects are often unpredictable in autistic kids.  He’s had more meltdowns when on stimulants, making the lessening of the hyperactivity not worth it.  So, here’s the question: Do I want to deal with a kid who does impulsive things, like unrolling a whole roll of paper towels or opening a jar of applesauce and spreading it all over the floor, or do I want to manage a kid who is melting down every fifteen minutes and trying to find a way to make him calm?

To others on the outside, I may seem to “have it all together.”  Whatever that means.  Let me assure you that this is an illusion.  I don’t know how I manage to keep my house as clean as I do, take care of two other kids, run errands, cook dinner, etc.

There are many days when my patience is at an end and I have just had enough.  I cry in my closet, angry that I can’t be a better mother or frustrated that MY kid has to suffer where others don’t.  I want to rant and rail at God, that it’s just not fair!  Why did You think I could do this?  I feel like the least equipped mother in the world sometimes, especially when I know that punishing an autistic/ADHD child for behaviors that he cannot help is not going to help anyone.

Some people tell me that I let him get away with things I shouldn’t.  Some tell me that he knows better, that he’s testing me.  There are times I believe this, and while there are cases when this thinking can be correct, it often isn’t.  Trying to discern when it is and when it’s not correct isn’t always easy.

For example, let me be clear that a sensory-induced meltdown is not a tantrum.  They may both result in the child crying, screaming, kicking, and flailing around on the floor, but a tantrum is the result of a kid not getting something they want.  A meltdown is caused by sensory-overload (like loud noises, bright lights, uncomfortable fabric, certain food textures, odd smells, etc.), and it may be that we don’t even know the cause!  We’ve all put on a scratchy sweater that we just had to take off.  We’ve all felt our heads spin from being too tired when walking around in an over-crowded store.  Imagine feeling overwhelmed ALL THE TIME.  This is an autistic person’s reality.  Then imagine someone punishing you for freaking out over feeling overwhelmed.

What I can tell you is that in the midst of wondering what good can come from of this, I have found that I am a more compassionate person, a more aware person, because my child has autism.  I understand that everyone deals with something at some time during their lives, whether it be depression or loss of the ability to walk.  Everyone is fighting some sort of battle, and it’s often behind closed doors.  Start talking to anyone, and you soon discover that person has a loved one who’s dying from cancer, that they’re in financial ruin, that they’re going through a messy divorce, or that their grown child has just been drafted overseas.

I also have come to believe that having a support system is crucial to going on this journey.  There are the teachers and therapists who work with my son who have been a godsend, but there are also people in my life who help me get through every day.  It’s often other special needs parents who “get it.”  Sometimes, we just want to commiserate with someone who understands.  We’re not looking for advice or the latest research article on special diets, genes that have just been discovered, or on whether or not to vaccinate.  We’re not looking for someone to come along and give us all the answers.  We just want to say “This sucks right now.”  We need to cry or rant or just be in silence.  I had another mom agree with me once and say “This is our reality, cleaning up poop.”  Yes, that was true, and it was reassuring to hear it from someone who understood.

And sometimes we need to remember to be thankful.  There are victories.  The small things DO matter.  At the end of the day, this child is still mine, and I love him.  No diagnosis can change that.