To go into debt?

Because God first gave to us His son, Jesus.

In the midst of the craziness of shopping, stressing, overspending, and stressing some more, it’s easy to lose sight of what matters.  Whether you’re Christian or not, whatever reason you celebrate Christmas–whether religious, secular, or both–I believe that this season can bring out the very best in people.

I went into this holiday season trying to not overspend on gifts.  Having three young kids, it’s easy to fall into the trap of buying them things they just don’t need, especially when they’re inundated with commercials for the latest hot toys.  What five-year-old doesn’t tell their mom at least once an hour, “I want that, Mom?”

I kid you not.

Kid.  Ha, I was talking about kids and wanting stuff.  Anyway, pardon my bad sense of humor.  I digress…

I fell into the same money pit this year by spending too much on my family, and I was torn between wanting to give, give, give and wanting to take some of the things back.  In the end, a mom’s desire to see her kids’ excitement on Christmas morning when it came time to open the gifts won out.

However, I am vowing to go about this insanity differently next year.  I want to donate or give to charity the same amount that I spend in gifts on my family.  That’s not an original idea, but I heard it somewhere, and it stuck with me.  I’m up for the challenge, and I’m not all talk. (Update: This was written in 2016. Now it’s 2017, and I am happy to say I lived up to this challenge of giving equally to charity what I spent on gifts.)

See, when I put my mind and heart to something, I can accomplish it.  Case in point: Almost two years ago, I sat down and said I was serious about writing an original story.  I would write at least fifteen minutes a day.  If I missed a day, okay, but I wouldn’t let more than two days pass without writing.  Ten months later, I had my first draft completed.  That was almost a year ago.  Now, I have the first draft of a second novel completed that’s currently being read and edited by a writers group at the library.  I have self-published my first novel after going through the arduous process of querying a hundred literary agents and getting many rejections, but I kept at it.  I am well into writing my third novel.  I have the first chapter written of my fourth and have an idea for a fifth. (2017 update: I have finished drafts of novels three and four.  I am well into my fifth.  I self-published novel number two.  I have ideas for six and seven.) 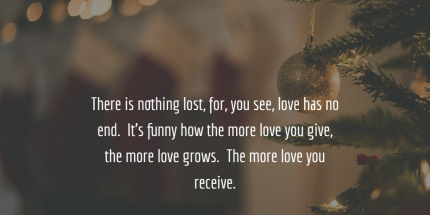 So, if I can write and be dedicated to it, I can be more generous next Christmas.  I can give more to those who really are in need and give less to my own family, who already has plenty of things.  We don’t need more stuff.

You might think, “Okay, that’s all well and good to make plans about what you’re going to do next year, but what are you doing about it right now?”

I do regularly give to charity.  I sponsor two children through Children International, but for me, that wasn’t enough this Christmas.  I became aware of a family in need.  The father had just lost his job, and having a kid to support, you can understand why I wanted to help out.  Also, this family is close to heart, so if there was something I could do to help them, it would be all the more important to me.

I didn’t have the means to personally give them much as far as money goes, so I organized a Go Fund Me campaign and rallied my friends and family for several days to give to this family.  It was a beautiful thing to see the response.  Many gave, and it’s not a matter of how much you give, but giving what you can.  In the end, I was so happy to be able to give them a sizable amount of money to help them pay their bills and put food on the table, and while I was a part of that, I cannot and do not take full credit.  So many people stepped up, and I love that.

Another friend told me about the local Elk’s Club wanting to give a large box of food and gifts to local families in need, and she thought of the family I was supporting.  Needless to say, I got in touch with the Elk’s Club, and they were so generous and kind to deliver such a box to this family. (2017 update: This family is doing well this Christmas, although her sister lost a child and doesn’t have the money to pay for much of a Christmas for her other kids because of funeral costs. Not only did the family I helped last year help this devastated family, but I was also moved to send them some gifts. There is always someone in need who you can bless.)

In the midst of all this, I have my own troubles, but to help others lifts the burden of my problems.  I firmly believe that reaching out and helping others is one of the best ways to help yourself.  Everyone benefits.  There is nothing lost, for, you see, love has no end.  It’s funny how the more love you give, the more love grows.  The more love you receive.

So, I did my little part in paying it forward.  I had no expectation of getting anything in return from those I helped, so you can imagine how moved I was to be on the receiving end of the generosity of others who felt they wished to help my family.  I never asked for it, nor expected it.

A Christmas card arrived from my church a couple of weeks ago with a hundred dollars in gift cards to a grocery store!  The card was simply signed “From your friends at church.”  I have recently expressed my heartache to some friends at church about the struggles my autistic son and my family are going through, so I can only guess that someone did this kind deed because of that.  I cannot be sure.

As if that weren’t enough, on Christmas Eve, my husband and I dressed to play Mary and Joseph and were waiting in a classroom for our entrance into the sanctuary when a friend approached me and handed me an envelope.  “It’s not really a Christmas gift,” she said, “but a couple of us from our ChristCare group (a Bible study group of sorts) wanted to help you out.”  I smiled, thanked her, and tucked the envelope in my purse.  Hours later, after the service was over, the kids were in bed, and the presents were under the tree, I opened the envelope to find three hundred dollars inside and a note that said, “For your son’s therapies.”  Tears streamed down my face for the second time this Christmas season because of the kindness of others.

So, as another year winds down, I am thankful.  It started around Thanksgiving with the extra intention of choosing kindness.  As Christmas came upon us, I made the extra effort to pay it forward in terms of generosity, just one form of kindness.  And it certainly came back around to touch me.

If you don’t believe that what goes around comes around, maybe you’ll think my story is just that–a nice little story.  To me and many others, it’s more.  Much more.  May we all go into the New Year with a sense of wanting to reach outside ourselves, and you’ll see.  It will come back to you.

My novel, Lorna versus Laura, is available for only $2.99 here.

My novel, Hannah’s Rainbow: Every Color Beautiful, is available for $3.99 here.