There it was for probably the hundredth time on the sign outside my local library: writers group, meeting 8/18 2-4:00 PM.  Okay, maybe not the hundredth time, but how many times did I drive past the library, which is about two point five miles from my house, and see that group advertised and not do a darn thing?  The sign was one of those LED types that showed all the happenings at the library, from book discussion groups to story times for children.  And my library had a writers group.

Of course, every time I saw that sign, I wondered, What do they do at those meetings?  Do they just sit there and write?  Do writing exercises?  Or do they read each other’s work while there and comment on it?

I imagined a small group, maybe four people tops, sitting around a table with pens in hand and paper in front of them.  These folks were nameless and faceless and voiceless.  Strangers.  I couldn’t really believe that there were actually other people in my own city who were writers like me!

I’d been writing for over a year last August.  I was content with my progress at creating a finished book and self-publishing it, but I’d had to ask several friends to read it and edit for me.  Looking back, I feel like I was pulling teeth in some regards, because only about half of them got back to me, and I didn’t wish to push them into doing something they may not have wanted to do in the first place — except that they probably would have felt guilty had they said no to reading my first draft.

While I was grateful to that group of friends, I knew that to ask my friends again for help of such a magnitude would be too much.  I was writing two more books, and let’s be honest — most people aren’t writers and editors.

So I thought, Why not give this mysterious writers group a try?

On August 18, 2016, I approached the library with a mixed feeling of nervous energy and excitement.  Every footstep carried me closer to the light brick building I had known and visited plenty of times in the thirteen years of living here.  But this time was different.  I held tightly in my grip the first chapter of my current work in progress, thinking I needed to bring something along.

I entered the library and asked the lady behind the circulation desk where the writers group met.  She directed me to a meeting room near the back of the building, past the computers.  When I stepped into the room, at least ten people of all ages (well, thirty and up) were seated around the table and all looked at me at the same time.  The chair at the head of the long table was unoccupied, so I took a seat and offered a smile.

The woman to my left and the man to my right immediately introduced themselves to me, and a minute later, the man who ran the group (and worked at the library) told me his name (let’s call him Jack) and asked me to tell them a little about myself.  I was at ease in this group, for they were welcoming and pleasant.  And I wasn’t the only newbie that day.  Another woman (let’s call her Kate) about the same age as me (mid-thirties) was there for the first time.  Kate smiled at me across the table.  I was at home.

I sat there for the next two hours and got a handle on how the group functioned.  Everyone present had read everyone else’s work and had made comments on the content and suggestions for grammatical or punctuation changes.  As they went around the table, whoever was next in the lineup got their turn to have their work critiqued by the others.  Not everyone spoke, but most did.  I could tell most of these folks had been meeting for a while.  Their easygoing manner was inviting.  There was plenty of humor.  No one was offensive or rude.  It was like stepping into a group of good friends who were hanging out and enjoying some good food and drinks. 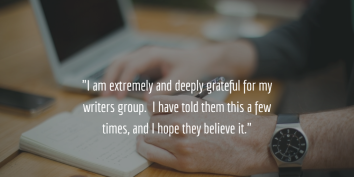 At the end, Jack asked me what I thought and if I’d like to come back.  “Yes!” I said.  I gave him my email address, and he explained how the group worked: They met every two weeks.  I needed to send him up to ten pages of my stuff before the first week was up, so he could then send out everyone’s stuff about a week before the next meeting, giving us all enough time to read and comment.

I was so enthusiastic that I sent him my chapter the very next day, even though I had a week to do so!  And so began the tradition that’s continued for almost a year.

People have come and gone from the group over the last several months, but there is a core group that keeps coming.  I have had the pleasure of reading what I consider good stories from a variety of genres from these folks: regular and cozy mysteries, romance, horror, nonfiction, short stories, sci-fi, and more.  There have been a few recent additions to the group who have become core as well, and it’s been amazing to see how the dynamic has stayed positive and inviting, with the humor never far away, since I joined.

What’s funny is that some people will shy away from joining groups like this out of fear.  If you’re a writer, maybe you just write for yourself, and that’s fine.  There are, however, many writers who want to get their stuff out there.  They write for their own pleasure and to share it with other people.  To allow fear of what others might say about your work is debilitating.  If you are serious about publishing your work, others will eventually read it…at least I would assume that’s what you want if you’re publishing it!

There have been times when what I submitted to the writers group needed some work, sometimes quite a bit of work.  I have gotten tough to swallow feedback, especially when it’s right in the moment.  Let’s face it — our writing is kind of like our baby, our kid.  We sort of fall in love with it (at least some of us do), and it’s hard to hear someone rip it apart.  Okay, that was harsh.  I have not had my stuff ripped to shreds.  No one in the group has ever discouraged me from writing or said I was wasting my time.  No one name calls or says that the work of another is only good for wiping someone’s backside.

Constructive criticism is meant to build up.  It may be tough to take, but swallow it down and let it digest a bit.  Realize that not everything you write it going to be stellar.  Some of it’s downright crap.  And that’s okay.  Because you know what?

You and I, we work at it again and again.  And come back better and stronger for it.  I am extremely and deeply grateful for my writers group.  I have told them this a few times, and I hope they believe it.

I recently finished a whole manuscript with them.  Ten months of edits on that baby have improved the story tremendously, and without this group of amazing people, I wouldn’t have been able to have the finished product I do.

If you’ve been looking for a writers group, check out your local library.  If your library doesn’t have one, maybe there’s one in the next city over or in the county.  In this digital age, there’s no excuse not to pop online and do a search.  If you’re still out of luck, perhaps suggest to someone at the library that they start a group…or even offer to run it if they don’t have someone for the job.  If you know at least a couple of other writers who are looking for a group like this and they’re local, start a group that meets in your homes, a coffee shops, or wherever works for you.  But make the commitment to meet regularly.  Have a routine, a schedule.  Hold each other accountable to it.

If none of that works, there are plenty of groups online.  It’s not as great as face-to-face contact, but it’s better than nothing.  Facebook has loads of groups for writers, but I recommend 10 Minute Novelists.  This isn’t a group to share your story directly, but every Tuesday is Buddy Day, and you can ask for someone to read your story and edit, often in exchange for doing the same for them.  Don’t expect people to line up to read your stuff if you aren’t willing to give back.

Besides the invaluable feedback on my stories I’ve gotten from my writers group, I have made friends with them.  There have been times when the subject matter of a story has triggered something for someone in the group, and real life stories have been shared in that meeting room.  Stories of loss and heartache.  Tears have been shed.  Hugs given.  Our hearts bared.

We’re writers.  We write about our deepest fears, desires, and our heart’s song, so why wouldn’t we also express those thoughts face-to-face?  That sort of genuine interaction isn’t easily come by.

Like what you’ve read?  Please subscribe to my blog, where I post a new blog at the end of every week and a book review blog the 15th of every month.

3 thoughts on “The Benefits of Joining a Writers Group”