Never mix business and pleasure.  It’s a phrase we’ve all heard, and there’s a reason for this.  The consequences can be disastrous.

This is the premise of Liv Bartlet’s debut women’s fiction novel, Production Values.  This edgy, contemporary, sometimes cut-throat story takes the reader on an emotional ride through the throes of best friends, Kat Porter and Bea Douglas, in Hollywood and the film industry beyond.  Kat and Bea are as different as night and day — the dreaming artist versus the level-headed realist — but their friendship and their partnership as Monkey & Me in the business of making TV shows thrives because of their contrasts.

I couldn’t help but be drawn in from page one to Kat’s desire for her dream to come true — for her vision to become reality.  She’s an art prodigy.  She’s ambitious.  And she’s also a hopeless romantic.

Everything seems to be working well for Kat and Bea with their highly-rated BBC show, 21 Things.  Kat pushes the limits of the show by hiring heart-throb and heart-breaker Ian Graham, the GQ-esque actor from Scotland with the sex body and voice.  Having a star like Ian on the show is sure to give the story-line that extra oomph to get a Golden Globe.

Bea is skeptical.  She has dreams of her own of stepping down from the world of producing shows and becoming a nurse and mother.  She comes from a family-oriented background that values close bonds, but she is ever-supportive of Kat’s dreams and goes the extra mile to make those dreams come to fruition.

But Bea sees Ian as a problem, a distraction.

But then golden statues become a reality for the whole team behind 21 Things, and it’s off to Hollywood from London.  With a Golden Globe under her belt, Kat is flying high.  She runs off with Ian while flying over Cloud Nine, leaving Bea to keep the rest of the team together. 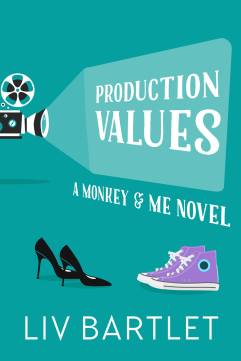 From there, Kat’s dreams grow.  More ideas for more shows means stretching herself too thin, and she relies on Bea even more to pick up the slack.  With growing reluctance, Bea does so.

But Kat’s dream-bubble pops.  Ian and her next show aren’t in the limelight, but Bea’s hard work is paying off.  The women struggle to keep their friendship afloat as Kat continues to chase a dream (and Ian), and Bea keeps wondering when she’s going to get off the bus that’s taking her to the wrong destination.

Can their friendship survive the sometimes brutal business of making shows?  Can they overcome their differences to each find their true happiness?  Or will a guy or a movie come between them, irreversibly damaging the Monkey & Me partnership?

The story keeps the reader pulled in, needing to know the answers, from page one.  The writing is poetry in the form of prose, metaphorical and entertaining at the same time.  The characters step off the page with their witty, cutting, cunning, and lovely dialogue.  Liv Bartlet doesn’t disappoint.

Liv Bartlet clearly did her research on the inner-workings of the film industry.  The story is clear-cut and renders writing that would appear beautiful on screen.

At the core of this amazing novel is the struggle we all must face — head versus heart.  We live in a world of relationships and choices — often decisions that aren’t easy to make without hurting someone.

I highly recommend this novel and applaud Liv Bartlet for delivering such an action-packed, punch-in-the-gut, heart-twisting story.

1 thought on “Book Review of Production Values by Liv Bartlet”