The service began at 9:30.  As it progressed, familiarity returned in full force.  A person might think it would be foreign, like wearing someone else’s broken-in shoes, to return after so many years.  The music, the words, the prayers–all were like slipping into a pair of my own old shoes.

The sermon nearly caught me off-guard.  The subject was on healing.  It was one of those sermons that seemed written just for me.  I listened intently, everyone around me fading away.  I could have been sitting alone in that sanctuary, my eyes on the cross.

Tears stung in my eyes.  I let them fall.  This release was long-coming.  This return long-overdue.  Nana’s warm hand took mine and squeezed gently.  She offered me a tissue from her purse, which I accepted with silent gratitude. 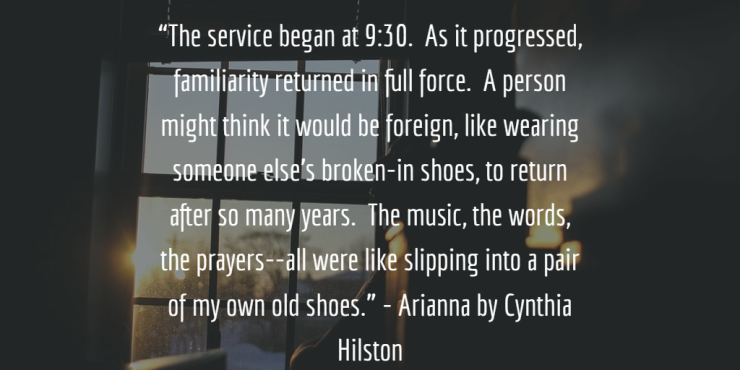 When the service was over, Nana asked, “Would you like to go to coffee hour?  I usually stay for a few minutes to talk to some friends.”

“I don’t want to hold you up from doing what you like, Nana, but if it’s all the same to you, I think I’ll wait in the car.”

I flashed a smile at Nana as we fell in behind the crowd exiting.  Part of me wished to escape through the back door, but part of me wanted to thank the pastor for the sermon.  People were shaking Pastor Meredith Emerson’s hand at the door to the lobby, which was the direction we were headed.  The pastor had been a grey-haired man on the verge of retirement when I was a child.  I’d only met the current pastor during my parents’ memorial service.  Nana had taken care of the planning on previous meetings with the pastor.  As we approached the pastor, my stomach knotted as guilt gnawed at my insides for shirking my duties where the memorial service had been concerned.

Nana must have noticed my reservations, for she asked in a hushed voice, “What’s the matter, Ari?”

“It’s stupid, but I’m not sure now if I want to shake the pastor’s hand.”

“We can go through the other door.”

“Can we?”  Relief surged through me.

Nana nodded, politely excused us from those nearby, and we headed away from the pastor.  Once we were outside, we kept walking until we were in the car.

“You seemed fine, to even enjoy the service.  Well, I don’t know if ‘enjoy’ is the right word for it, but you seemed…moved.”

“I was.  I-I am.  Oh, how do I explain this?  Her sermon was just what I needed to hear.  It’s cliche to say it, but it spoke to me.  I even wanted to thank her, but then I realized she’s a stranger.  I was ashamed about the memorial service and not showing my face to help with the plans–”  Why did everything have to be so complicated with me?