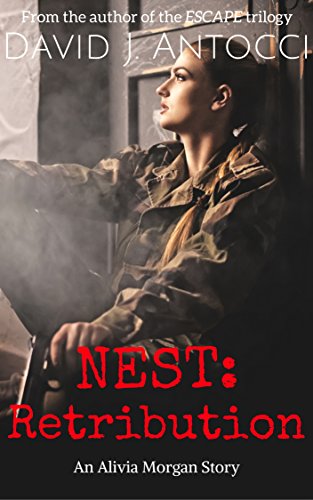 While I am not normally one to pick up a thriller, this novel turned out to be one of those pleasant surprises.  From the very first word of this page-turner, I couldn’t stop reading.  I was reminded of watching a fast-paced action movie.  The scenes in this well-written novel certainly kept me wanting to know what would happen next!

David Antocci’s novel opens with an Islamic extremist suicide bomber standing in a crowd in Boston, where a Congresswoman is about to speak.  You know it’s not going to end well.  NEST, New England Special Terrorist Division, of Homeland Security is on it, but they have the wrong suspect.  As imagined, the bomb goes off, killing and injuring several people, including two NEST officers.

We shift to a heartwarming scene of a young woman named Alivia Morgan playing football with her nephew outside her parents’ home.  She has finally been given a break from serving her country, but after the Boston atrocity, she is called in.

It turns out the terrorists set off the bomb to get back at Alivia.  It’s personal because Alivia led a mission to find and kill an Islamic extremist leader.  Being a female that high in position went viral back home for her heroism, so with her name and face all over the media, there was no hiding from the world what she did…even though she didn’t want the recognition and hoped to return to a more peaceful life of serving her country back home instead of across the sea.

Now it’s become a game for the terrorists.  They demand the U.S. government hand over Alivia to them or more bombs will go off.  While Homeland Security doesn’t wish to give in, Alivia insists on playing along, in the hopes that the U.S. will prevail by saving her and taking down her captors.

It’s certainly a scary situation to imagine yourself in Alivia’s shoes.  What’s to say the terrorists won’t set off more bombs anyway?  What’s to stop them from killing her right away?  The stakes drive higher and higher as the story advances, so you can see why this novel is a real page-turner.

In addition to the gripping plot, the characters’ dialogue is spot-on for what I would imagine soldiers talking like when working under pressure.  There’s no sugar-coating things, yet there is an underlying tenderness between Alivia and her boss, Luis, as well as her secret boyfriend, fellow solider JJ, who has been injured by the terrorists.

Antocci certainly did his research for this novel.  When the team who is tracking Alivia is busy at work with computers and maps, the detail of their work is amazing.  I would believe the author has actually worked in such a facility because these scenes are written so well.

So, how high to the stakes go?  To tell you more would ruin this great novel, so I highly recommend you get a copy of this newly released book and give it a read!

Visit his website and learn more about his other books here.

Like what you’ve read?  Please subscribe to my blog, where I post a new blog every Friday, including book reviews.  Please note: I will be taking a break from posting blogs until January 2018, due to the holidays and time constraints.  Poetry and excerpts from my novels will still post weekly.  My apologies for any inconvenience.  Thank you for your support!

My new novel, Lorna versus Laura, is available for only $2.99 here.

My first novel, Hannah’s Rainbow: Every Color Beautiful,  is available for $3.99 here.