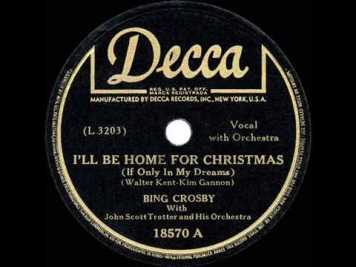 Incorporating history into historical fiction is fun. With Christmas on the verge, I am loving writing Christmas scenes right now. In my current work in progress novel, Rocks and Flowers in a Box, there is a scene in 1944 at Christmas where the two main characters put on Bing Crosby’s “I’ll Be Home for Christmas” and dance, while hoping the protagonist’s brother will return from the war by next Christmas.

The song was originally recorded in October 1943 for soldiers to hear, as I can imagine many of them longed to be with their loved ones at Christmas. Every time I hear Crosby’s voice crooning this song, I think about that time period.

Here is an excerpt from my story featuring the scene I’m referring to:

“Do you think Chucky will come home soon?”

“The tide has been turning in the Allies’ favor for several months now. I believe you will see your brother next year.”
I stepped back enough to gaze into Tristan’s face. “It’s too bad Chucky can’t be home for Christmas.”
Something shifted in Tristan’s eyes. He released me abruptly and stepped away. “That reminds me.”
I furrowed my brow. “What are you up to?”
“Trust me.” He cast a smile back at me as he went to the record cabinet and retrieved a record. “I thought this would be the perfect touch for your sentiment.”
I approached him and looked at the album in his hands. The 78-RPM single of Bing Crosby’s “I’ll Be Home for Christmas (If Only in My Dreams)” rested in his grip. Tears formed and fell freely. “Yes, put it on.”
Tristan removed the record from the sleeve and placed it on the turntable. He set the needle on the record and turned the player on. Crosby’s gentle, crooning voice filled the room a moment later, accompanied by the John Trotter Scott Orchestra. My husband and I wore twin smiles, the sadness and the happiness mixed, the hope and the grief of the lyrics tugging on our emotions. He took me in his arms, and we danced to the music. I leaned into his sturdy chest and allowed the words to take me somewhere else and nowhere at all.
When the song ended, my eyes slid open. Snow continued falling beyond the windows, but in our little living room with its old-lady furniture and my messy paintings, hope and love blossomed that one day soon, Chucky would be home for good. I meant to tell him as much when I wrote him a letter later that day.