To some, the start of a new year is the beginning of promises, a fresh start, a time to try again.  Even though it’s just another calendar year, there’s something mentally stimulating for many to take on a new challenge in a new year, to better themselves, to start a new hobby, or whatever.

To others, the start of a new year is just another day.  The Christmas decorations come down.  The festivities are over.  They prepare for the winter doldrums.  They hunker down and try to get through the darkest time of the year, both in the amount of daylight and mentally.

It’s now the end of January, late enough in the new year to evaluate a few things.  Many people who had well-meaning resolutions have probably already stopped trying.  They’ve thrown up their hands in failure for not making it to the gym regularly, for smoking after stopping for five days, for eating too many calories, for not taking enough “me” time, the list goes on.

Stop beating yourself up!

There’s a more positive spin of looking at resolutions, or, as I and many others like to call them, goals.

When I posed a few simple questions about resolutions, most people said they didn’t make them.  Those who did make them said that they like to set ones that are measurable and realistic.  In the short-term, like a month, a person might say they wish to read a certain number of books or try a new recipe.  Or try to not complain as much.  That’s a hard one!  Over the course of the whole year, those months add up, and they found that it’s easier to stick to short-term goals.  By saying how much weight a person wants to lose per week versus a whole year, it’s not so intimidating.

These short-term goals could be classified as resolutions, but they are manageable.  They aren’t the type of vague resolution that’s far-reaching.  Many people admitted to not making resolutions any longer because of past failures, saying they didn’t wish to feel even worse about themselves.  So, in this vein, it really is better to break down large goals into smaller ones, whatever they might be.

Often, just taking it one day at a time, stopping and taking a deep breath, and slowing down can go a long way toward helping a person feel better about themselves and their goals.  Days turn into weeks and into months, and before you know it, a whole year has elapsed.  By keeping a positive attitude, goals and tasks don’t have to be overwhelming.  They become more achievable.

If you want to declutter your house, for example, don’t say you’re going to tackle the entire kitchen in one day.  Start with one drawer or cupboard.  Work on it for fifteen minutes per day.

If you want to lose weight, don’t just suddenly cut out all your favorite foods and say you need to work out at the gym every day for an hour.  Cut out one bad food this week and then another the next.  Try to add on eating more vegetables, even if you still need your chocolate.  Join a class with a friend at the gym.  It makes you more accountable if you have a buddy and a set time each week.

What else can you do to stay on track with your goals, since we’re pretty set on not calling them resolutions? 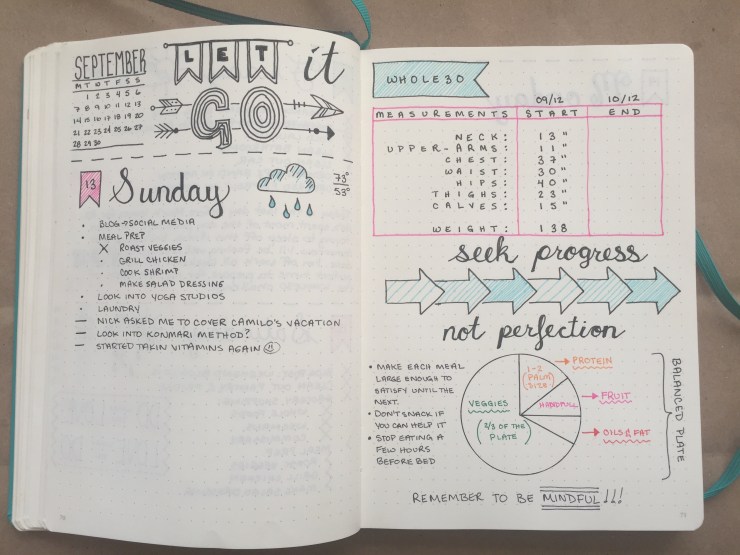 Journaling is great for some.  Although I don’t regularly journal, some people swear by bullet journals.  If you go on YouTube and do a search, you’ll find plenty of videos explaining what they are and how to set one up.  Many people claim these journals help keep them organized and on task, achieving their goals and moving forward.

Or get creative and make a goal board.  Turn on some of your favorite music and cut out pictures from magazines that inspire you or words or phrases that mean something.  Paste them all on a large poster board and keep it somewhere to look at, to remind you of what you’re aiming to get out of this year.

Or, going back to the evil “resolution” word, resolve to do something that you’ve been meaning to do for a long time.  Maybe it’s getting back in touch with an old friend.  Maybe it’s finally getting your finances in shape.  Again, break it down into smaller, manageable goals.  Of course, reconnecting with an old friend is a lot more fun than finances!

Then there are those, like me, who will work on a goal whenever inspiration strikes.  Almost two years ago, I sat down with the intention of finally writing an original story.  That was 2015, which was nine years after I had the idea to write a story based off my late grandma’s life.  I’d written a few paltry chapters and had written down some notes from her primary sources, but the idea intimidated me for years.  I was much more comfortable in the realm of fanfiction.  I spent twenty years writing fanfiction, even before I was online!

It’s funny.  Looking back, I am amazed that I spent so much time writing fanfiction when I could’ve been working on original stuff and doing what I’ve always dreamed of doing — writing stories that are my creations.  Now, here I am, in 2017 with that story written and self-published, a second story completed in the first draft and going through edits with an amazing writers group at my local library, a third story nearing completion in the first draft, a fourth story in the beginning of its creation, and an idea for a fifth!

How did I do it?  Perseverance.  By setting the goal of writing for just fifteen minutes a day, I was able to do all that.  There were days I missed here and there, but I didn’t let more than two days pass without writing.  Then there were days when I wrote for a couple of hours, so it balanced out.

I am living proof that by breaking down a huge goal into manageable, measureable, short-term goals, an amazing amount can be achieved!

Like what you’ve read?  Want to read more?  Consider downloading the e-book or ordering a paper copy of my original book, Hannah’s Rainbow, available on Amazon: Hannah’s Rainbow: Every Color Beautiful

This blog will be updated at the end of every month.  Stay tuned for February’s blog: staying in love long-term! ❤