“As long as we can love each other, and remember the feeling of love we had, we can die without ever really going away. All the love you created is still there. All the memories are still there. You live on – in the hearts of everyone you have touched and nurtured while you were here.” -Tuesdays with Morrie 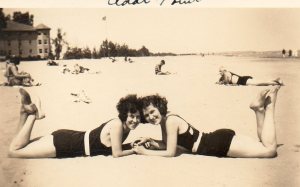 My great aunt Alma and my grandma, Emma, circa 1931

Today, I am going to share something very special to me, something close to my heart.  Below is the true story that inspired my first novel, Hannah’s Rainbow:

When I was fifteen years old, my grandmother was terminally ill. Months earlier, she had had a sarcoma removed from her leg and had undergone radiation therapy. She was given a clean bill of health in February of that year (1995). Shortly thereafter, she went to the hospital because she had fluid in her lungs, and when they did a scan, they found a spot: the cancer had metastasized to her lungs in a matter of months. Although given two to six months to live, her time on Earth would be much shorter than that.

The day she was released from the hospital and placed under Hospice care, I wrote a letter to her, telling her all that she meant to me, how much I loved her, and how much I would miss her. I expressed my heartfelt admiration of her courage to face what lay ahead. And I asked her to send me a sign once she reached Heaven, not because I was afraid she wouldn’t go there, but because I needed the comfort.

Two weeks later, she came to our house. It was the week before Easter, and she was to spend the time with us, and her sister from California was to come in as well. On the night she arrived, she was still walking and talking. Although thin and weak, she was still herself for the most part. I remember her eating an orange in the family room as I talked to my best friend on the phone.

The next morning, she never got out of bed. The day was gloomy and overcast with thick clouds of early April showers. We thought it might just be the weather or the fact that she had been transported the night before. I overheard my dad speaking to his brother on the phone that morning, saying he didn’t think she would live more than 24 hours. In denial, I refused to believe such nonsense. All I had ever known was a life that had my grandma as part of it; to imagine otherwise was unthinkable!

The pastor from her church came that afternoon to visit, and while doing math homework in my bedroom, adjacent to the room she was in, I heard his voice through the walls, uttering the twenty-third Psalm: “Though I walk through the valley of the shadow of death, I shall fear no evil, for You are with me. Your rod and Your staff: they comfort me.”

She was asleep most of the day, and the couple of times I approached the darkened room where she lay so still on the bed, I think I was afraid. At the time, I didn’t understand why I was feeling that way, but I think now it was because I couldn’t reconcile the figure I saw in that bed with the figure I knew of her warm smile, cheery eyes, and rosy cheeks.

Some relatives came to visit in the mid-afternoon, and she seemed to brighten some, even laugh at a few jokes. My family was originally planning on attending a concert at the high school that evening, but due to my grandma’s condition, my parents remained home with her, and my brother and I attended by ourselves.

A couple of hours later when we returned home, it was dark and still raining slightly. We parked on the street because there were a couple of other cars in our driveway, and I felt my heart skip a beat as I rushed up the driveway and into the house, not wanting to believe the worst. The first sight that greeted me was my mom walking toward me, her face lined with tears, and she was shaking her head. I knew without having to ask. To this day, over 20 years later, the events of that entire day as are clear as if they happened yesterday.

Standing in the kitchen were my uncle, my dad, and the pastor. We held hands and formed a circle as the pastor said a prayer. I left the kitchen to go to the spot where Grandma had been, but she was already gone from the bed. I saw the men from the funeral home carrying her out, covered in a sheet.

She was truly gone. That night, I dreamt that my mom died, too. While my parents were away the next day taking care of everything, I was at home in the company of my best friend, and it continued to rain. I found it in me to laugh some, finding a pair of checkered pants that was so hideously out of style, but my grandma wore them, anyway. I pulled them over my own clothes and just laughed, mostly because my best friend could always make me laugh. We were visited by a cousin and her husband, who had brought over dinner, and the four of us laughed some more. There was something therapeutic in this, although it was also a brief escape from the reality of the situation.

The wake was two days later, followed the next day by the funeral. It rained in all the days between my grandma never leaving the bed and on the day of the funeral. My letter to my grandma was read at her funeral by the pastor. The Lord’s Prayer was sang by the co-pastors, a husband and wife team. My grandma’s favorite hymn, “The Lost Chord,” was played. As the family followed the casket down the aisle, I was a sobbing mess, and my brother, who was walking alongside me, put his arm around me. I remember briefly trying not to laugh, as we had this weird thing about never touching each other as teenagers, so hugs were forbidden.

Much of the graveside service was a blur, but we stood under a tent as the rain continued. A dinner was served, and then it was over. We were on our way home. That evening, the rain finally stopped. I was in my room when I heard my mom exclaim, “Cyndi, come here!”

I ran into the front window and looked outside. Stretched across the sky was a rainbow! I smiled and knew this was my grandma’s sign to me! There was no doubting that, and to explain this away as mere coincidence is an insult to her, her memory, and to our Lord of miracles. My mom and I turned away for just a moment, and when I looked back, it was gone. To catch such a brief moment in time when that rainbow appeared was not coincidence in the least. Only my mom and I saw that rainbow; it was meant for us.

My grandparents, Howard and Emma Grundman, circa 1942

I had the idea for the story back in October 2006.  I woke in the middle of the night with the name “Hannah Rechthart” on my mind.  “Hannah” means ”favor” or “grace.”  “Rechthart” means “right heart.”  I started writing down character names and researching.  Many details from early in Hannah’s life were taken from an autobiography my grandma wrote in high school and another she and her younger sister, Ida (whom Irma is based on), wrote later in life about growing up, called “The Billhardts of Fuller Avenue.”  I also spoke extensively with my mom and had my own memories to work with for Hannah’s later years.

I composed four chapters between October 2006 and January 2009.  Then I had my first child and my second, and the story sat for years, until I started writing in earnest in March 2015.  It may have taken a decade to finally sit down and write it all out, but only by God’s grace and my grandma’s legacy was that inspiration possible.

It’s been over twenty years since my grandma passed away, but in writing this story, I hope I was able to convey with the love I’ve always had for her that she was a wonderful person.

May you see many rainbows in your life, wherever you go.

The Letter I Wrote to Grandma: 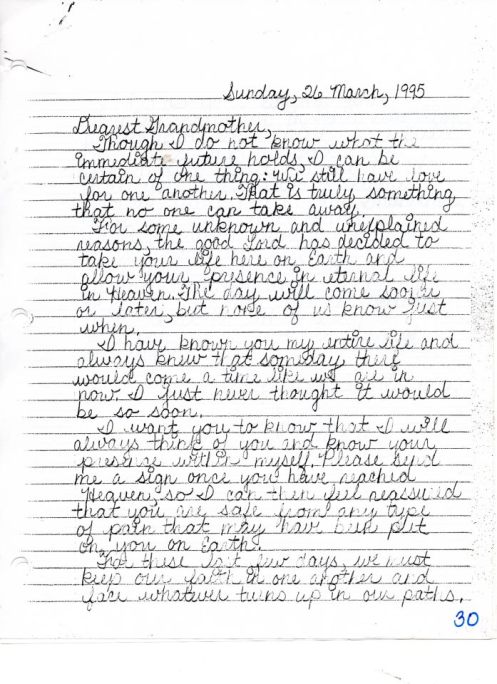